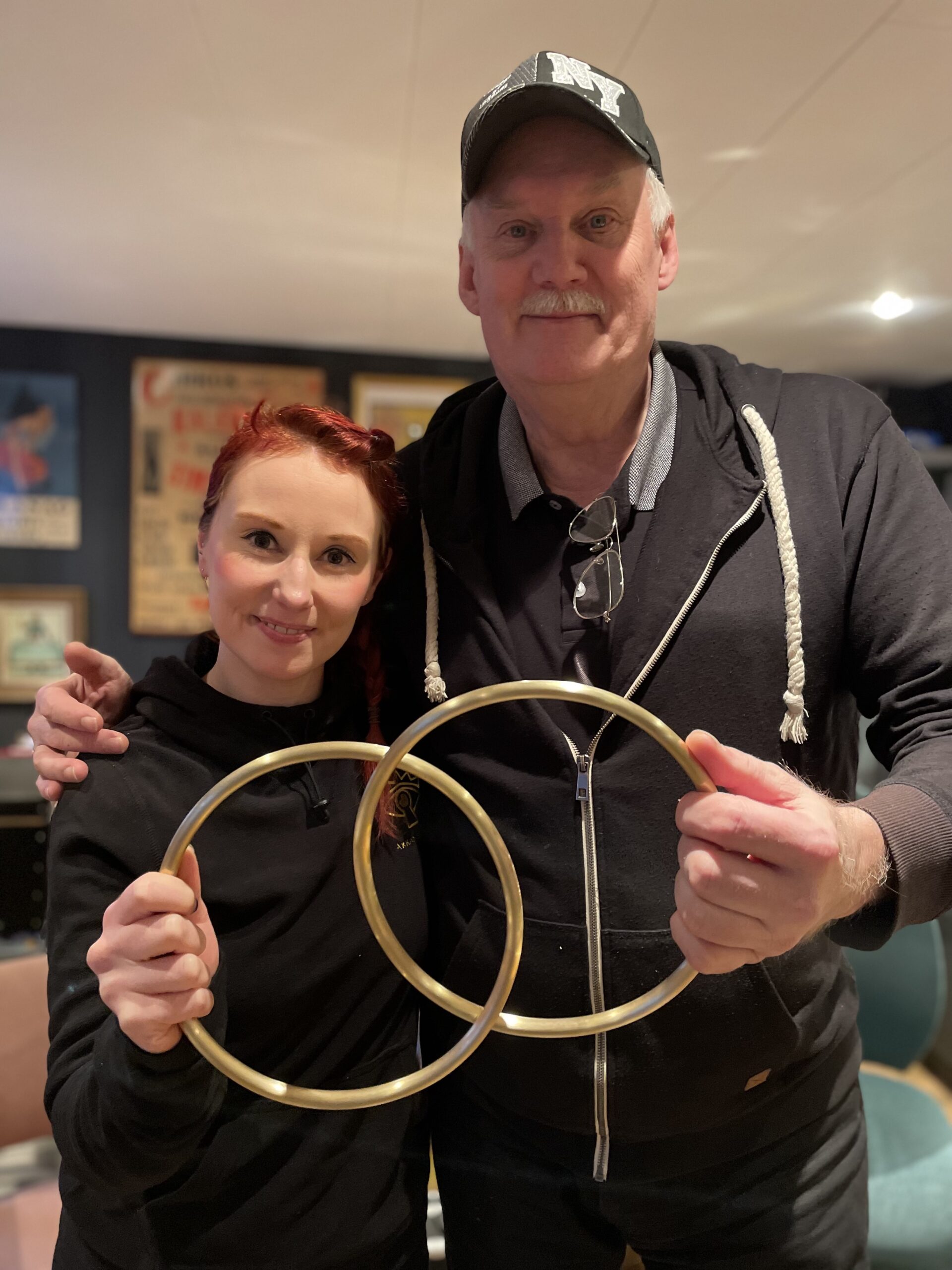 Firstly an apology for this late blog post. I left you all hanging whilst I was performing in Sweden at Mystique, Norway at the Magic Club and England in Trix in the Stix. If you want to re-read Part 1 of Killing your darlings to refresh the old memory click here.

After going through my audition experience last week, it would be only right to relive the horror of creating and killing off ideas for my semi final act also.

This process was a lot more intense than with my audition piece for several reasons related to the time I had to create the piece and what could realistically be achieved within that time frame.

A big problem I found was deciding upon what to perform. What exactly is semi-final material? And do I currently have anything in my repertoire that meet those requirements? In December the answer to those questions was I don’t know and no. So it was back to the drawing board to build something from scratch.

Well… not exactly. I did consider bringing out my old ring and rope act that I competed in the I.B.M. Stage competition in 2019 and failed to place with. Even though I was convinced that darling was long dead as it no longer brought me joy, perhaps it was time to revisit it once more.

After much consideration and research I thought perhaps the initial idea of the act was actually a good one but the concept needed changed. Perhaps less focus on the story and more on the magic – after which the story would flow.

I always liked the idea of using a ribbon instead of a rope with this routine because it felt more feminine. Also it could potentially make the act visually nice to look at on stage and bigger. But using a rope for the ‘ring and rope’ effects and tricks I had learnt was so much easier to use. When trialling material instead of the rope, it just didn’t behave the way I wanted it to. It was hard work and æsthetically it just wasn’t nice to look at or work with.

Another darling bites the dust!

I also had an idea to do some moves with a rope, switch in a ribbon and do different moves which were more suited to a ribbon. On paper this idea seemed great, but in reality switching between a rope and ribbon was not elegant or appealing to me. I just didn’t like it. So out the window that idea went.

I was becoming really frustrated and upset that nothing was working out. Time was ticking on to the point I even considered dropping out of the competition as I believed I had nothing good enough. And I did not feel good enough – a thing that deserves a full blog post in itself!

In the end, the real secret lay in me killing my perceptions of what I wanted the routine to look like in my head and step up my skills with practice and perseverance to get something real into the rehearsal room – which, with great determination, I managed to do!

What helped me in this process was discovering that others had managed to work with a ring and ribbon in a way I could only dream of at this point in time.

Time to bring in an expert!

Discovering Tina Lenert’s ‘Simply Magic’ act and Axel’s ‘Ring and Scarf’ act were a huge drive to begin with. Both artists managed to make the movements and transitions with the ring and silks smooth, graceful and the effect of this was like seeing real magic. They both were not afraid to take their time and really show off the simplicity of the props whilst hiding the fact they were doing so much work ‘behind the scenes.’ They were like swans – graceful above the waves whilst kicking like mad underneath!

However, being me, I did not wish to imitate something done before. I wanted to create a piece that was uniquely Nikola Arkane.

One thing that became clear was, I needed to bring in an expert as I was so out of my depth.

You are probably wondering why did I need to hire an expert when I could just buy a ring and a silk from a magic dealer? Well, there were several reasons for this.

The ring I needed had to be large enough to be seen on the t.v. screen. The colour had to be specific also, not to shine too much or fade out in the background. And it needed to be a particular weight to do the moves with the silk. There was nothing like this currently on the market. And when you can’t find, you must make it yourself or find someone to help.

I first met Tim in 2018 when I attended Tom Stones Conjuring Course in Sweden in 2018, where I, along with twenty lucky magicians from around the world, got to make their very own magic wand from scratch under the direction of this talented craftsman. He is responsible for me turning my home upside down and usurping all my dad’s tools in order to bring my ideas in my head to life.

Tim hopped on board building me a beautiful brass ring (and spare). He also a special gadget for the silk which I have dubbed ‘the devil incarnate‘ as it simply was a b&%t#€d to learn to work with. By the time I got these props from Tim, it was less than two weeks before the live semi-finals and from that point on I literally never stopped rehearsing. To the point my arms and hands were physically exhausted. I don’t think I have ever worked so hard on anything ever like this before!

There were times I thought I am never going to tame these props. But every day I worked on it, it did get easier.

I learnt a very valuable lesson in those two weeks prior to the semi-finals. Never say out loud something is impossible or this is hard. If you do you will simply not be in the right mindset to every achieve something.

However, if you just change one word I promise you that your attitude will change towards learning something new.

I forced myself to say this is ‘NEW‘ not hard or impossible, just new. When you work with a prop or try something new it is going to be difficult. If it isn’t you are not doing it right or you got lucky this time.

It is ok not to be able to do something. What isn’t ok is berating yourself continually because you can’t do something right away. This attitude will never get you to your eureka moment.

Just keep on going, it’s new and frustrating but one day it won’t be.

To be continued… The Finale, Part 3 of Killing your darlings will go live next Thursday 2nd June. See you then!

I discovered this little gem of a video podcast. The guys have just started this project but I think it might have something different to offer than other podcasts in that the guys are taking moves from The Royal road to card magic (and perhaps in the future other books) and breaking them down each week from reading them to executing them. If they stick to this format they might be onto something.

Give it a go the first episode might even be on them. Creative Coffee Club.

No Comments on Is talent the new superpower (7) Killing your darlings isn’t that bad Part 2/
Share :