Home » News » Journal » This is Halloween! 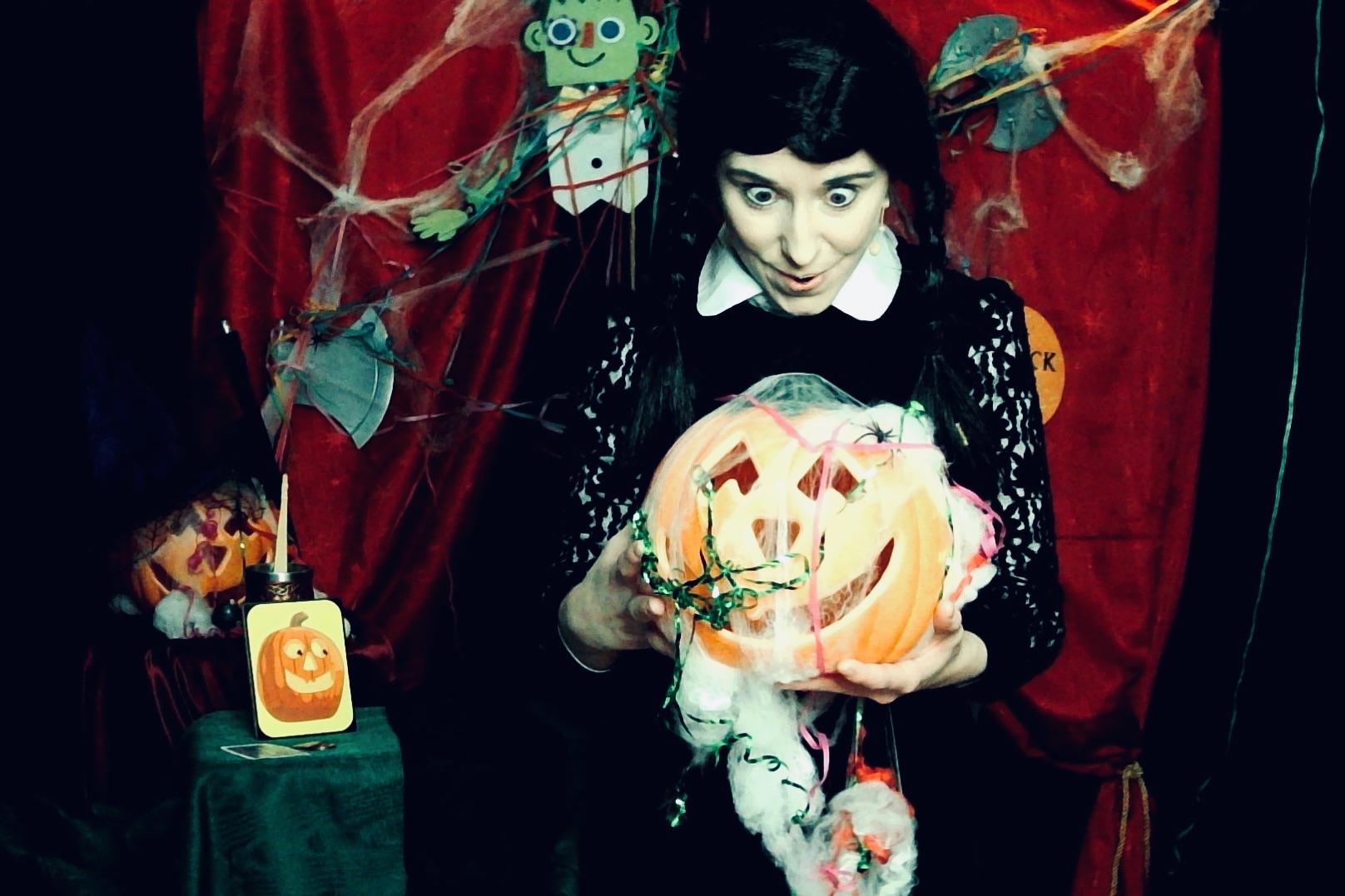 My favourite time of year. Except Halloween 2020: the deadly and frustrating Pandemic – where real horrors exist. Not in the fear of the virus but the true horror of human stupidity and selfishness. I kind of want hide behind my sofa and just eat candy. Swedish candy of course!

However I choose to get out there and continue to fight for this wondrous industry we have. I intend to keep on brining wonder and mischief to audiences around the world. No matter what happens as this is my chosen career. Magic is what I love. It’s both my passion and vocation. Just like any other calling (priest, teacher, politician, butcher, baker or candlestick maker) I will keep following my vocation. Just this year it’s pushing me to create in epic style.

Looking back on the past two months I’m quite pleased with myself and all that I have managed to come up with.

Another 7 brand new magic shows came to life for children broadcast virtually online. Take a look at the madness below!

The last two weeks I believe I’ve been quite inventive. Trusting that after creating 17 shows – with little rehearsal – I can potentially pull something miraculous off. Well at least appear to have the confidence too. As Tom always tells me “Fake it till you make it!”

I’m beginning to take on board that everything has the potential to fail. Whether you have performed it once or fifty times. So, isn’t it better to just try something and get it out there. And then keep on trying it; in front of real people? Rather than performing and pretending the effects to yourself?

It’s like that cause that’s the way it is, huh!

The last show I performed online was a Halloween themed show. As I had to prep to go to Italy and work, I had very little time to prepare this one. I usually have two days at least – where as – this time I only had twelve hours. The reality was that this show (miraculously) turned out to be one of my most fun and enjoyable shows. And I started pondering why? Surely with less time on my hands the show quality should be less, right? It’s should be HORRIBLE!!!

Having a very short time deadline reminded me of first course I took with Tom Stone in the summer of 2018.

After viewing each others performances we came to the conclusion that the simpler the ideas we had the better.

It turned out that the groups who enjoyed the tasks the most were the ones who just grabbed an idea and went with it immediately.

Where as, the groups that were indecisive and struggled to pick one effect spent way too much time talking. And not enough time doing.

By quickly choosing the effects I wanted to perform for halloween; even though I had performed none of them before, gave me more time to focus on creating the concept. Rather than trying to decide on all the tricks in my possession. By limiting my choice of effects I moved swiftly onto learning them and creating the story and show.

On that note I thought you might like me to go through the show I created. The material and effects I used and my thinking behind each one? Here we go!

Making a magic show is like baking a cake!

I mentioned in a previous blog post that I have a method for creating a thirty minute magic show. That works, every time. I have stuck to this method each week. By doing so, every show is varied with new material, music and characters for the children to see.

Begin with a song!

After welcoming my audience and saying hello to everyone individually; I like to open up the show with some music and song. It breaks up the magic and helps the audience to relax before the show beings proper.

Going back to saying hello to the audience. I’ve always believed that its vital that you personalise. But clocking each name I also remember them so that I can mention individuals throughout my performance. It’s an extremely low key way to help your audience engage with what you are performing. Also they will remember that you took time to say their name.

Learning and remembering names took time and practice. But for me this has been time is well spent. Particularly when I see performers ask a volunteer their name and immediately forget it.

So first tip pay attention. Be present in your own show!

Let’s provoke a deeply ingrained instinctive response, shall we?

Have you ever wondered why horror movies at certain points along with the music makes you feel uneasy? Creepy music is always a cue that something bad is about to happen. Many studies have been carried out on people when they are exposed to these non-linear sounds. Apparently they provoke almost a reflex reaction in our brains. We begin to feel threatened.

Take a moment to imagine the famous shower scene in Hitchcock’s ‘Psycho’ and hard hitting music in Stanley Kubrick’s ‘The Shining.’

Aren’t those nail biting sounds shriek are the definition of scary? BOO!

Alongside a very creepy soundtrack, I tried to come up with routines that were slightly edgy. But keeping some FizzWizzPop charm. Remember kids love to be scared. It’s ok to bring them to the brink of terror after which you lighten the mood and offer some candy. That’s why halloween is so much fun!

The effects I used in this particular show ended up being close up effects. Which surprised me as this is not the material I generally hunt out for my kids work. And more importantly on screen work.

Chosing to perform intimate close up magicallowed me to bring my audience into this weird world. Rather than exploding out with FizzWizzpop style. I showed them a different side to my character.

We should all remember to try things out of our comfort zones. You really never know what you might discover about yourself, or character when you do.

Here is a picture of all the props required to perform my halloween show, (bar the Glorpy).

The first effect I performed in this show was Steve Dusheck’s ‘Lethal Tender’ which is a fantastic effect. Simple but beautiful. You show two contrasting coins and place them into your hand, closing your fist around them. You then take out one of them and set it on top of your closed fist. With a quick snap of playing card; on top of that coin on top of your hand, and the two coins magically changed places.

Even on camera this trick looks wonderful. I combined this effect with a story about trick of treating. When I was a kid I did get sweets when I visited houses on halloween. We used to get money or coppers, as they would be called.

After collecting my loot I would go to the shop and buy sweets. The story for this effect became a spooky trick or treating one. Where a little old lady handed me two very unusual coins…

I’ve had this effect in my possession for a long time. But never actually used it. I have to say it is quite brilliantly spooky. But how to link this in from the last effect?

I have also had a ‘Haunted Hanky’ or ‘Glorpy’ that I have never used before. I had the notion of making the key magically appear inside the handkerchief.

The Story link between this effect and the last became discovering this handkerchief was attached to my costume. Showing it freely I then folded it upon the table. “I wonder if this is is a spooky hanky?” I say.

The hanky then begins, to move, to grow, I get scared and then it settles, “perhaps it’s that little old lady still playing tricks on me?”

When I open up the hanky the haunted key is inside. And then I perform the effect. Performing this on camera for an online show I had to find a position quite close to the lens. So that they could see my hand and the key completely.

This is another interesting tip when filming stuff for virtual shows. Use your space as much as you can to add depth. Some effects look great from further away and others play better up close – Like the Haunted key. Just because you are performing to a camera doesn’t mean you can’t used the same principals that we do in our live shows. They just sometimes need some tweaking!

Here is fantastic performer with even better props. I discovered Tommy James two years ago and I cannot recommend his products for children’s performers enough. However, this little effect really had a journey.

When I first got the effect I was very new to magic like this and handling larger cards. I could never remember the routine. Even after loads of practice and basically the last two years it sat in my drawer. (I think I even tried to sell it off at one point).

I am so glad no one bought it because now when I was looking for a halloween effect for my virtual shows I decided to take it out and have another go.

Strangely, two years on, with more knowledge and experience under my belt I was able to understand the moves but perform the routine immediately. Typical!.

A little lesson for me and perhaps you too; always go back to tricks. One’s that you mightn’t have liked, understood or got, because your skill set is always in development. You never know what your future self might be able to do. And there was a reason you bought the effect in the first place!

Let’s end with a Night Terror!

This last little effect was described to me by Tom. He wrote it up in Genii magazine as part of his pastiche series in which he created magic in the style of other artist in the industry. This included Max Maven, Jim Steinmeyer, Ali Bongo and in this example Silly Billy.

His goal was to imitate them not only in performance style but in the effect he created as them. The style in which wrote up their effects explained and their taste in methods.

Tom and Richard Kaufman very kindly let me share this article with you all so that you too might have some fun creating some night terrors this halloween too! Really every magician should subscribe to this wonderful magazine. Go to the Genii website and find out more.

*The effect that is discussed is Michael Close’s ‘Down for the Count’ which can be found in his Workers 3 book which you can purchase here, or indeed get the whole series as a halloween treat.*

On that note I will leave you with this amazing article and wish you all a Happy Halloween!