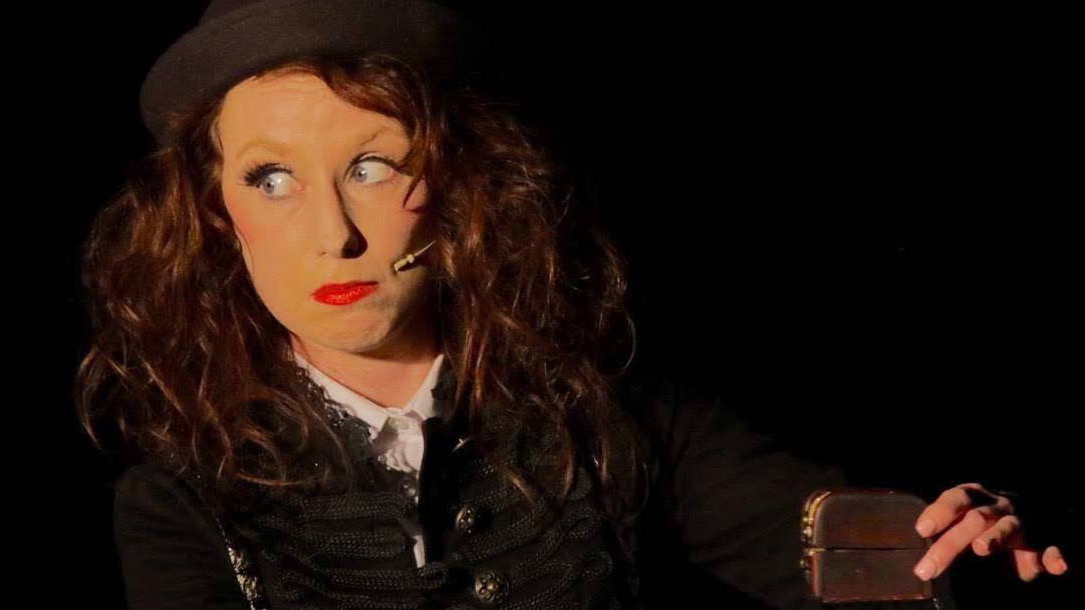 Performing in the magic industry more, I have noticed dozen’s of shows around the world that are filling theatres with magic. This is a good thing right? Magic in the spotlight, audiences paying to see world class magical entertainment?

In nearly all of the fliers, photos and shows half the population are not being represented. The amount of shows going on around the world that features all male magician casts is astonishing. As a women in this industry this makes me sad. This image is steadily changing – thankfully.

Providing a platform for people to look up too.

We all need to look up to people.

I think something wonderful will happen when this industry is more equally represented by men and women.

There are glimpses of this happening already. I’m just returning home after attending The Session with Vanishing Inc and it was wonderful for me to see and listen to the fabulous Laura London talking on the main stage.

Thank you to Andi, Josh and the team at Vanishing Inc team for beginning to make this happen for us women in the field!

I am biased. Seeing shows advertised online that have no women on the bill I begin asking questions like…where have all the women gone?

Why isn’t there at least one female (that’s not an assistant) in these shows? A women who is actually performing and headlining as her own person. Being the star too. Sharing the stage with her fellow male colleagues.

***I encourage you all to have a closer look at Magic advertising again. I guarantee you will not be able to unsee the trend I have mentioned above. Once its noticed.***

I’m not saying that everyone out there is not trying to integrate. However today, when there are more girls than ever in the industry is it not time we saw more diversity in shows?

I’m putting this out there to suggest that maybe we can all help to facilitate this change. This will make a better industry. One where no one feels left out, or inadequate for being different.

Are females different? And is that a good or bad thing?

For many years I felt completely inadequate to my male colleagues. I’m not sure if this was down to tradition, they’re doing or my own. Or whether this feeling came completely from a societal issue. It’s only been in the last year where I’ve had the confidence and skills to really push and believe in myself. To the point I now don’t consider myself a female magician, I am just a magician who happens to be a woman.

I also got thinking that maybe these feelings are felt by men too in our industry. That it’s not just a ‘woman thing.’ Maybe in magic there is just a big acceptance curve and everyone feels inadequate at some point not just because of what sex they are.

I do feel like I have something more to prove. Entering any historically male dominated industry has its challenges.

This post began because of something that made me upset recently. I’ve just took you all on a long winded journey to get to the point behind this post.

Hope you enjoyed the ride!

I am always looking to improve my skills as a magician practicing little things in the background that hopefully will come to fruition before I’m old. I decided this year it is time to begin seriously thinking about palming and getting more technically skilled as a performer..

I’ve tried palming before, loads, and over the years I’ve been told by an uncountable number of male magicians, (sorry guys I love you all dearly but to this point it has been men telling me this only), anyone can learn to palm. It’s not the size of your hands that matters its the technique. It’s true anyone can learn to palm. But the right tools can help you learn faster.

What if your hand is a fraction of the size of a normal male one? (Or person in my case). Thanks goes to Denis Behr from Germany for acquiescing to my weird request to take a picture of his hand beside mine after just meeting me!

My hands are tiny. Since starting magic I have done everything with a poker sized deck as that is the standard in magic. However, I have to admit there was another reason. I felt I would be considered inferior to everyone else if I used a smaller pack of cards.

On a side note: I’ve been told many times over the years too that to be a proper magician I must be seen to use poker sized cards. FACT!

Why has size become such a revered thing?

When I began learning this technique, it was completely impossible for me to palm or hide a poke sized card – which is normal for any sleight. Technically I couldn’t retain the position at all, and even if I changed the way I held the card it would fly out of my hand. I would need to create a brand new handling that would be awkward and take years. It also might be one I would never master – why? Because right now my hands are small. I can feel you all going well just practice more, and I get that.

Regardless of practice and method I got very upset because I realised that my option right now was to use bridge sized cards. And to make matters worse, because of what others have said to me in the past, I got into my head that I was now a complete failure.

I cried. How could I ever perform for other (male) magicians using a bridge size pack of cards. when they were using the superior poker sized deck?

***Another side note too (which did not make me feel any better) Bicycle bridge sized cards are not red they are pink – I kid you not. They don’t even look like proper bicycles. The time and effort that goes into printing them clearly is not the same for a poker sized deck. Set them side by side and have a look yourself.***

The time that this all came to pass I was in Sweden with Tom – who is extremely knowledgeable in magic as I’m sure some of you know. After helping me to get all my failure out, he showed me something that I will never forget.

He sat me down and played a clip of Alex Elmsley doing his four card trick (which I discussed in last Monday’s post).

Can you guess what cards he was holding in his hands? Bicycle of course! But they were one hundred percent, undeniably Bridge sized playing cards. Tom laughed and told me quite a few of my idols used them too including Tommy Wonder.

Years ago you couldn’t get Poker cards in Europe and everyone used Bridge. It’s only been in the recent years that bigger sized cards have become a trend in magic.

Suddenly I felt that having small hands was not a problem or a disaster that it was a normal thing.

To help me feel like a proper magician and not a failure in magic, Tom very kindly made me my very own bridge size Arkane Deck. He used my logo and made the deck proper red in colour. And it is the BEST gift I’ve been given, ever!

Would you like a sneak peak? Let me introduce you to the very first Arkane Deck!

Even though they are expensive as hell right now to buy I will be using and buying them for the rest of my career. I absolutely love them.

Never give up. The only person you should compare yourself to is you. It doesn’t matter if you are a girl or a boy, have big hands or small ones. Don’t hold yourself to ransom because you do things differently to others.

We are magicians. We all love magic and that’s the real secret.

The way you do something may be totally different to someone else, but that doesn’t make it better or superior. It makes it unique.

We are all unique in this world and in magic, so let’s celebrate that1